ZigBee vs Z-Wave: What's the Difference? Everything You Need To Know | Symmetry Blog

Tyler Wojciechowicz in Blogs on November 13, 2018 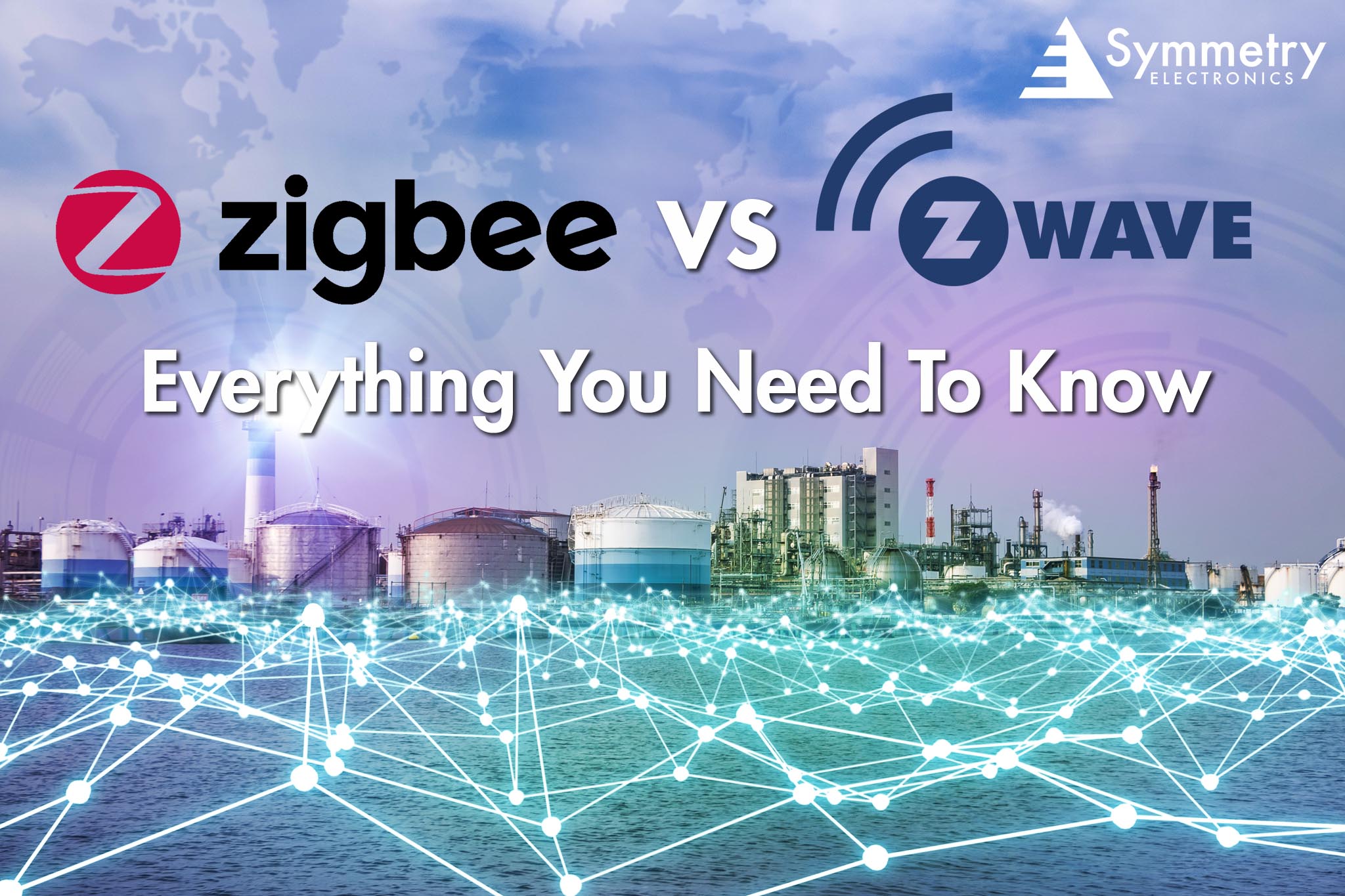 Knowing the differences between ZigBee and Z-Wave can be tricky. We break down the comparison between these two technologies and help you decide which technology fits your design needs.

The market for the Internet of Things is exploding, and various IoT ecosystems have cropped up to claim superiority on all things IoT. Consumers and engineers alike are left feeling overwhelmed with the large variety of options available to them.

If you have done any research on what ecosystem to follow, it's likely you’ve heard of ZigBee and Z-Wave. Some of the most popular technologies available for IoT, both Zigbee and Z-Wave offer an alternative to the massively popular Bluetooth.  There are reasons why you may decide to choose ZigBee or Z-Wave, as they differ in their specifications and applications.

Continue reading to learn everything you need to know about ZigBee and Z-Wave.

The more popular of the two, ZigBee is a low-power wireless mesh network standard for battery-powered devices. As a low-cost solution for wireless control and monitoring applications, ZigBee has become very popular in the industries of home automation, data monitoring, management systems, and industrial equipment.

ZigBee’s technology was designed so that custom profiles could be developed and deployed, making it faster and easier for manufacturers to create wireless products for common applications. This lowered the bar for many OEMs to create ZigBee products, contributing to ZigBee’s popularity today.

ZigBee devices operate in the unlicensed industrial, scientific, and medical (ISM) bands; for most regions in the world, ISM bands are at 2.4GHz, although specific countries may use additional bands as well.

Unlike ZigBee, Z-Wave was originally developed as a proprietary SoC home automation protocol by Zensys and then by Sigma Designs after Zensys was acquired in 2008. Silicon Labs recently acquired the Z-Wave protocol and now controls all Z-Wave chip manufacturing. As such, the Z-Wave standard is not open to the public.

Z-Wave uses the unlicensed frequency band in the 908MHz range, which helps avoid interference with ZigBee, as well as other popular wireless technologies like Bluetooth and WiFi.

While Z-Wave lacks the flexibility that is offered by ZigBee, it does avoid certification issues that other protocols may face by maintaining a strict certification process.

This process ensures every Z-Wave device provides interoperability with each other. This may not always be the case for ZigBee, as explained later.

Z-Wave is not as ubiquitous as ZigBee, but recently OEMs have started to take notice of Z-Wave. This could soon change with the recent acquisition of Sigma Designs by Silicon Labs, which may indicate future Z-Wave support from products offered by Silicon Labs. Together, Silicon Labs and Z-Wave open the door to millions of potential users of smart home technologies by expanding access to a large and varied network of ecosystems enabled by partners such as Amazon, Alarm.com, ADT, Samsung SmartThings, Yale, Google Home and Comcast

How do ZigBee and Z-Wave compare?

Why would one choose ZigBee?

Why would one choose Z-Wave?

What are some brands supporting ZigBee and Z-Wave?

According to ZigBee’s website, some of the major brands using ZigBee technology include:

According to Z-Wave’s website, some of the major brands using Z-Wave technology include:

Some brands support both, although this could be cost inefficient depending on your application.

So which one should you use?

Like any answer, it always depends on your application.

Between the two, ZigBee has had the bigger market share, but Z-Wave has been making large strides to match ZigBee these past few years.

ZigBee is open to the public but certification rules can be confusing to uninitiated. Z-Wave is propriety technology available only to customers and limits the options available for Z-Wave components, but this helps ensure that certification is strictly enforced and provides more reliable interoperability between Z-Wave devices from different manufacturers.

“Customers can go and purchase products with Z-Wave in them, but they can’t create or tinker their own stuff with Z-Wave,” says Tyler Wojciechowicz. “To join the Z-Wave ecosystem, there’s stringent certification process and can take up to 6 months. All companies/design engineers looking to use Z-Wave in their design, have to go through this process.”

Technology wise, ZigBee provides a stronger data rate, but Z-Wave provides farther range. Depending on your application, you may prioritize one over the other. ZigBee also operates on the same frequency as Wi-Fi and Bluetooth and may be more susceptible to interference compared to Z-Wave.

Something else to consider is the topology that technologies like ZigBee and Z-Wave operate on. As Cobus Heukelman, an applications engineer at Symmetry noted on “Why My Money is on Bluetooth Mesh,”

Zigbee [and] Z-wave… [both] use a routed mesh network topology. In these networks a message is sent from source to destination going through a specific sequence of only certain devices. In other words, the message only takes one route to get to its destination. This is more efficient compared to flooding, because only a select few devices on the route have to retransmit messages. The down side is that more intelligence is needed to know the required path for each message.

It’s therefore important to make sure your application will be able to account for the processing required for mesh networking.

It is not clear yet whether these two technologies will persist side by side, or if one will prevail over the other. They could also face a challenger from Bluetooth Low Energy, which also provides engineers with similar low power and mesh networking options.

Like any technology, it is best to ask an engineer specializing in wireless technology for more information on what would fit your application best.

Silicon Labs offers a variety of high-quality ZigBee modules for your wireless application. Some of our recommended products include:

Other Products to Check Out:

Tyler Wojciechowicz in Blogs on November 13, 2018