With its support for 8x uplink and one downlink LoRa channels, the Conduit AP is capable of supporting thousands of LoRaWAN end points, says MultiTech. (See farther below for more on MultiTech’s own mDot and xDot end-point modules.) The device provides 27 dBm maximum output power (before antenna), and supports 902 to 928MHz ISM LoRa in North America and 863 to 870MHz ISM in Europe.

The internal, omnidirectional antenna features a +2 dBi gain, and supports both LoRa and 4G LTE with 2×2 MiMo. The LTE capability, which provides the device’s backhaul along with a 10/100 Ethernet port, is enabled via a pair of mini-SIM slots.

The Conduit AP supports -10 to 60°C temperatures, and offers MIL-STD-810G and SAE J1455 compliant vibration and drop resistance. It also provides FCC and EN3x compliance for EMC and radio, as well as network approvals from AT&T and Verizon.

The Conduit AP is compatible with MultiTech’s own, ARM Mbed controlled, -40 to 85°C resistant MultiConnect mDot and smaller xDot LoRaWAN 1.0.1 end-point modules. Both support up to 16 kilometers (10 miles) bidirectional line-of-sight communications and about 2km into buildings at LoRaWAN data rates from 293bps to 20Kbps, or at up to 300Kbps with frequency-shift keying (FSK). They both offer up to 14 dBm (Europe) or 19 dBm (North America) maximum transmitter power with 130 dBm (Mdot) and 137 dBm (XDot) max. receiver sensitivity.

The 37.3 x 25.5mm mDot runs on a 100MHz, Cortex-M0 based STM32F411RET MCU with 128KB RAM and 512KB flash. The device supports up to 21x digital I/O and up to 11x analog inputs, as well as SPI, I2C, and UART interfaces. There’s also an MTUDK2-ST-MDOT development kit with antennas, USB cable, RSMA cable. Alternatively, you can choose a USB dongle form factor MTMDK-MDOT development kit with integrated LoRa antenna. 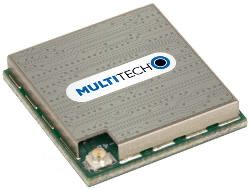 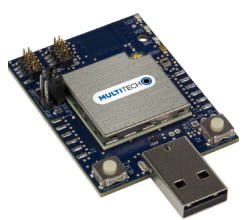 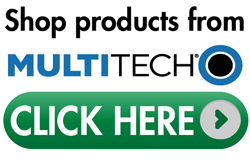