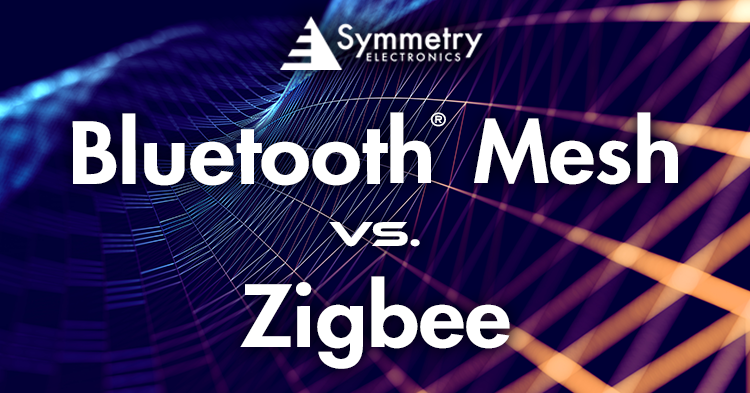 What Are Mesh Networks?

While the concept of mesh networking has been around since the 1980’s, the expense and scarcity of available radio spectrum kept the technology from gaining traction until 2015. Mesh network connections are comprised of multiple interdependent nodes that share the same connection over a large area. Acting in the same manner as a wireless router, each node of a mesh network is a small transmitter capable of self-discovery. As opposed to star network topology (Figure 1), mesh networks are decentralized in nature. Mesh networking allows nodes within the same network can communicate with multiple nodes at one time. Signals can reconfigure routing paths based on the network structure and provide network stability in the event of single node failure.

Bluetooth mesh networking provides users with the convenience of native smartphone connectivity without a gateway and has added benefit of location services capability using Bluetooth Low energy (BLE) beacons. Bluetooth mesh-enabled devices are advantageous in smart home technology as they are an ideally suited solution in networks with a limited number of nodes. Devices that incorporate Bluetooth mesh networking are power-efficient as they operate on BLE. Bluetooth mesh-enabled devices feature a longer battery life because the low-power signals they transmit repeat themselves, instead of sending one constant signal.

Using a flood message relay approach, Bluetooth mesh networking communication is peer-to-peer based. Nodes transmit signals directly with each other. The lack of a centralized node eliminates the challenge of single-point failure.

Widely considered as an alternative for Wi-Fi and Bluetooth devices, Zigbee is a routing mesh based on IEEE 802.15.4. Zigbee is ideal for low-power devices that require small-scale bandwidth. Zigbee mesh networking supports up to 65,000 nodes on a single network. As an open global standard, Zigbee additionally operates on unlicensed bands of 2.4 GHz, 900 MHz, and 868 MHz.

The Zigbee Alliance is comprised of over 300 companies and implemented Zigbee 3.0 protocol to provide a convenient wireless data solution that is characterized by reliable and secure wireless network architecture. Zigbee’s 3.0 protocol is designed to ensure compatibility between different product manufacturers. If a device utilizes Zigbee 3.0 Protocol, it will communicate with other Zigbee 3.0 certified devices regardless of the brand.

When it comes to deciding between which standard is most suited for your device design, consider the following:

Zigbee is optimal for short-range connectivity, like smart home environments. It’s simple to install and battery life is preserved through its inherent low-power usage. However, Zigbee’s security protocols are not as advanced as Bluetooth mesh’s robust multi-layer security measures. Zigbee networking can be incorporated in applications involving home and building automation, wireless sensor networks, data collection, industrial control systems, embedded sensing, and more. Bluetooth mesh is mostly used in lighting and home automation applications. As a flood message network, Bluetooth mesh is reliable, but speed/efficiency may be influenced as transmissions must navigate the entire mesh network to successfully relay signals.

Jari Haiston is part of the growing digital marketing team at Symmetry Electronics. Jari comes from a background in technical writing and event coordination. In her current role, she specializes in content creation and social media management. Jari's focus as a writer is to create interesting content that is accessible to any audience.
Tags: Wireless