Why AMD Embedded - Part 7 of 9 in a Series Presented by Symmetry Electronics and SemiconductorStore.com

The following is an example of an embedded application deployment containing a relatively small network of 100 digital signage systems. Let’s compare how the solution would be deployed and supported over the first 5 years of operation using a standard commercially available PC-based solution and a true AMD Embedded solution.

Below shows the assumptions used in this example:

Key parameters to consider when comparing TCO between a PC-based system and an Embedded system for a typical Digital Signage Application deployment.

Note 1: Failure rate assumptions are based on embedded player solutions being designed for reliable 24/7 operation in a typical digital signage environment while a typical PC is not designed for 24/7 operation in this same environment.  A typical digital signage environment often includes enclosed cabinets to block out dust, and installation in areas that are not temperature controlled.  Actual failure rates may vary.

Note 4: Aberdeen Group, The Evolution of Remote Product Service - April 2009. Found an average cost of a service dispatch to be $276.

At the end of Year 3 however, the situation has changed significantly. For the PC-based system, additional failures in years 2 and 3 (10/year) and unavailability of the original platform after the first 12 months contribute to having a total of 30 systems that have been replaced and 3 unique HW/SW configurations that now have to be supported within the network. Conversely, for the Embedded system, failures result in only 15 systems being replaced and all with the original HW/SW configuration. 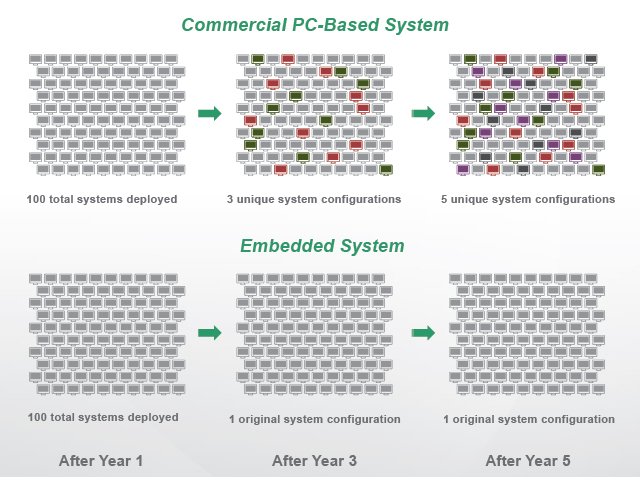 An example of an embedded application deployment containing a relatively small network of 100 digital signage systems as deployed and supported over a 5 year period will be presented in part 7 of our series.

In part 8 of our “Why AMD Embedded” series, we will present a more in depth analysis of the PC vs. Embedded cost comparison and demonstrate the potential cost savings of an AMD Embedded system over a five year period with significant savings potential beginning as early as year 2.

Symmetry Electronics (and its e-commerce division: SemiconductorStore.com) is an authorized AMD Embedded distributor.