Why AMD Embedded - Part 3 of 9 in a Series Presented by Symmetry Electronics and SemiconductorStore.com

In part 3 of our “Why AMD Embedded” series, we look at how industry leader AMD Embedded has followed the evolution of embedded system standards for everything from form factor to testing environments such as the 780E Chipset Development Board.

Since 1982 when the VMEbus Manufacturers Group was founded (and renamed VITA in 2005), VITA has championed open system architectures for the embedded systems.  AMD Embedded has continuously followed such groups in order to comply and meet all necessary standards.  Followed by the PC/104 Embedded Consortium (1992), PCI Industrial Computer Manufacturers Group (PICMG) (1994), Khronos Group (2000), Embedded Linux Consortium (2000), and more recent entities such as the Small Form Factor Special Interest Group (2007), and ProSE (an initiative driven by the Standards Working Group of ARTEMIS in Europe established in 2008), these standards entities have been attracting the industry’s biggest players into the embedded market.  AMD Embedded Systems has been at the forefront, adapting and driving open standards in all facets of embedded system technology. 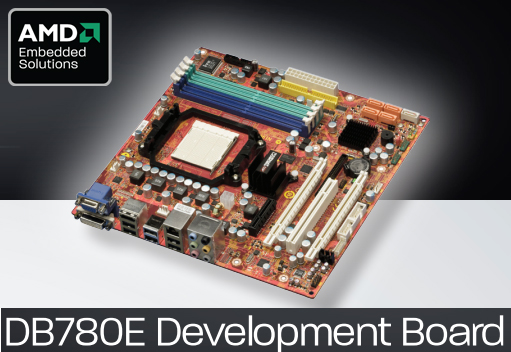 While many of these entities (or their subcommittees) are market specific (Consumer, Instrumentation, and Automotive for example), they have common goals such as establishing standards that simplify development tool creation, enabling higher performance and feature-rich software, improving testing and robustness of systems, and increasing expandability, scalability and interoperability of platforms. Also, because of the migration of PC-based CPU architectures into the embedded space, many high-end embedded systems today (predominantly x86 based) incorporate PC technology and interface standards such as OpenGL ES (an embedded version of OpenGL) for graphics acceleration, SATA for hard drives and PCIe® for discrete graphics hardware. Other expansion capabilities, such as USB for peripherals, 10/100base-T for Ethernet, and DDR2/3 SDRAM for system memory are also being standardized. This adaptation of PC technology, in conjunction with the advancement of specific embedded technology standards, is enabling a wider variety of commercially available AMD Embedded systems and applications to more easily be migrated and optimized for embedded systems.

Meeting today's embedded system standards is very important to AMD Embedded and in part 4 of our "Why AMD Embedded" series we will see how AMD Embedded not only meets these standards, but continuously dominates its competitors in regards to cost and TTM.

Symmetry Electronics (and its e-commerce division: SemiconductorStore.com) is an authorized AMD Embedded distributor.