You might be wondering why we’re writing about sharks again. We’re fascinated by sharks, and with our corporate headquarters nearly next door to a great white shark breeding ground, they’re a big part of the local lore. In fact, just over a month ago, a surfer was attacked by a shark in nearby Manhattan Beach (he survived). 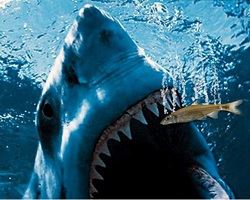 In celebration of Shark Week, we’re taking a look at the top 5 shark-related technologies.

Despite its well-documented malfunctions, Bruce, the animatronic shark built for the 1975 movie classic Jaws, led the way for the explosion of animatronic special effects in films in the 1980s and 1990s.

Bruce was actually a collection of three sharks, each costing $150,000 to build, nicknamed for director Steven Spielberg’s lawyer. Two were versions known as platform sharks, one that moved from camera-left to -right and the other from camera-right to -left. The hidden sides of each of these left exposed pneumatic hoses and gears. The third shark was known as a sea-sled shark, a full-body prop attached by a 100ft long cable to a steel platform sunken to the ocean floor requiring 14 operators to control its movements. They were created by a 40-person special effects team led by Bob Mattey, who created the giant squid in 1954’s 20,000 Leagues Under the Sea.

The sharks were made of hard polyurethane rubber over a tubular-steel skeleton, but were not water-tested before arriving on location in Martha’s Vineyard two months after filming had begun. The first day Bruce was tested, he sank and had to be retrieved by divers. On the second day, the hydraulic system exploded. The salt water of the Atlantic Ocean caused problems with the onboard electrical systems, motors, and pneumatics.

In hindsight, Jaws wouldn’t have been what it was without Bruce’s numerous setbacks. The technical hiccups forced the crew to shoot much of the movie without showing the shark as planned. This allowed Spielberg to create the film’s iconic feeling of suspense before Bruce’s big reveal 55 minutes into the movie.

Among the infinite number of projects that can be created with littleBits Electronics, you can make your own Swimming Shark! A scaled-down model of an installation at the New York Museum of Modern Art (MoMA), this mechanical monster maneuvers back and forth to swim through air just like a real shark swims through water.

Ready to jump in with littleBits? Symmetry carries the full line of littleBits components so you can create anything you can imagine, including the DC motor, power module, RGB LED module, slide dimmer, and wire required for the Swimming Shark project.

Scientists use two types of tags to track and study sharks: the Smart Position-Only Tag (SPOT) tracks individual sharks in real time using satellite positioning, while Pop-Up Archival Tags (PAT) record water pressure, temperature, and light by disengaging themselves from a shark at a preprogrammed date and transmitting data once they float to the surface.

Recently, a new tracking tool has been developed, in the form of a torpedo-shaped autonomous underwater vehicle (AUV). AUVs present a less disruptive way for researchers to study sharks, including being able to build a 3D map around an individual shark to better understand its environment and surroundings. A REMUS AUV captured some great footage in 2013.

In 2011, Lufthansa began the two-year Multifunctional Coating research project that sought to determine whether a new surface coating mimicking the riblet effect of a shark’s skin would reduce air flow resistance and thus increase fuel efficiency. Two Airbus A340-300 planes were outfitted with eight 10cm x 10cm lacquer-coated patches attached to the fuselage and wings of the planes. Initial results suggested that the planes could increase fuel efficiency by 1%. This translates to around 90,000 tons of jet fuel per year, saving roughly $95 million. Results from the project are being analyzed, and Lufthansa is looking into methods to economically coat entire planes with the riblets.

Hesitant to jump in the ocean after reading more about sharks? Head over to Kickstarter to back NoBite Technology’s Ocean Recreation Comfort Apparatus (ORCA) wearable shark deterrent, which comes with a $1 million NoBite Guarantee. The watch-sized, rechargeable ORCA emits sounds that claim to keep sharks away without harming humans or marine life. The ORCA creates a 100ft (30m) “Sonic Camouflage” buffer, and will last up to 12 hours on one charge.

Want to design your own sonic or wearable device? Symmetry stocks audio ADCs and DACs, codecs, amplifiers, and development kits for wearables.

If you want to keep the ocean safe for humans and sharks, support your local Surfrider Foundation.