TRINAMIC Motion Control announces the TMCM-1210, a highly miniaturized yet technologically leading-edge stepper driver unit. The evolution of technology is transforming all industries, including motion control. Components are becoming faster, cheaper, more powerful… and much smaller.

“For many manufacturers, miniaturization is transforming their organization by allowing smaller and decentralized devices, resulting in leaner processes and reduced storage and logistics cost,” explains Trinamic’s CEO Michael Randt. “With the NEMA 8 motor mountable TMCM-1210, Trinamic once more demonstrates its ambition to be at the forefront of technology”

The general trend towards miniaturization is driven by a demand for compact, decentralized devices instead of huge machines. This trend is visible in all kinds of applications such as microbiology instrumentation, lab automation, scientific test equipment and micro precision systems.

Like all other TMCM modules, the TMCM-1210 embeds advanced motor control functions, as well as motion control and PLC features, into a tiny and cost-efficient module. The new driver module (20mm x 20mm) is equipped with an RS485 interface and Trinamic’s proprietary TMCL™ protocol. Together with the free TMCL-IDE, this allows for easy implementation of a standalone program flow. Graphical tools and wizards guide through the parameterization.

Being based on Trinamic’s latest stepper motor driver generation, the TMCM-1210 offers leading edge current control technologies. A high-resolution microstepping with up to 256 equidistant microsteps per full-step generates a total resolution of 51.200 steps per rotation, resulting in vibration free positioning. With Trinamic’s patented stealthChop™ current control for silent positioning at low speed and spreadCycle™ for highest performance at high speed, the module provides superior performance wherever small stepper motors are used.

The integrated sixPoint™ ramp generator allows for precise and rapid positioning. Even in environments where parameters and target positions must be changed during motion. The module has a reference switch input that can be programmed as left or right limit switch. In addition, it comes with stallGuard2™ for sensorless homing and an integrated rotary hall encoder. 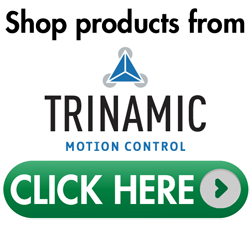