From Murata: "Murata's Cheerleaders take on role as Ambassadors for Supporting Culture and Tourism in Kyoto"

Murata Manufacturing Co., Ltd., is proud to announce today that Murata’s Cheerleaders were bestowed the role of Ambassadors for Supporting Culture and Tourism in Kyoto. 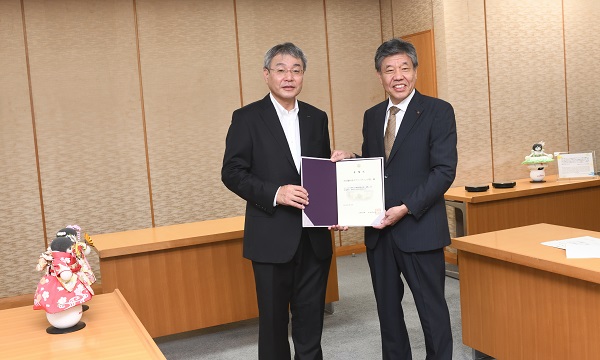 The production of the clothing, decorations, and other accessories for the robots were worked on in collaboration with Kyoto prefecture at the “Kyoto Power of Culture Project,” held from December 2017 to March 2018. The dissemination of the power of Kyoto culture occurred through workshops to collect ideas from students and artisans in the field of traditional Kyoto crafts (such as Nishijin textiles, etc.) across a wide range of ages led to this commission. Further, at “Tokyo Caravan in Kyoto”*2 held in September 2017, under the direction of playwright and theatre director Hideki Noda, Geisha and Murata’s Robot Cheerleaders performed alongside one another at Nijo Castle in a performance combining Kyoto’s tradition and technologies.

Murata’s Cheerleaders will continue to support electronics designers and manufacturers around the world, and contribute to spreading the culture of Kyoto.

Created to bring vitality and delight to people all over the world, Murata’s Cheerleaders were born from bringing together various technologies cultivated at Murata. Their key features are stabilization, which keeps them upright, and synchronization, which keeps them from colliding, both features that are made possible via ultrasonic position measurement technology, group control technology, and inverted pendulum control technology. All of our Cheerleaders will give their very best performance, and support innovators all over the world.

*1    As we move towards the year 2020, the Kyoto Power of Culture Project aims to bring art and culture from Kyoto to the world, and deliver a stream of new artistic creations from a melting pot of excitement and enthusiasm through interaction and collaboration with both local and international communities.

*2    “Tokyo Caravan” began in 2015 as Tokyo Metropolitan Government’s Leading Project, serving as the lead-in to the Cultural Program of the Tokyo 2020 Olympic and Paralympic Games. Under the concept of engendering new forms of expression through the mingling of cultures between a diverse array of artists, with such encounters transcending borders, language, culture, expression and genre, this initiative sees artists engaging in performances all over the country that go beyond their respective genres.