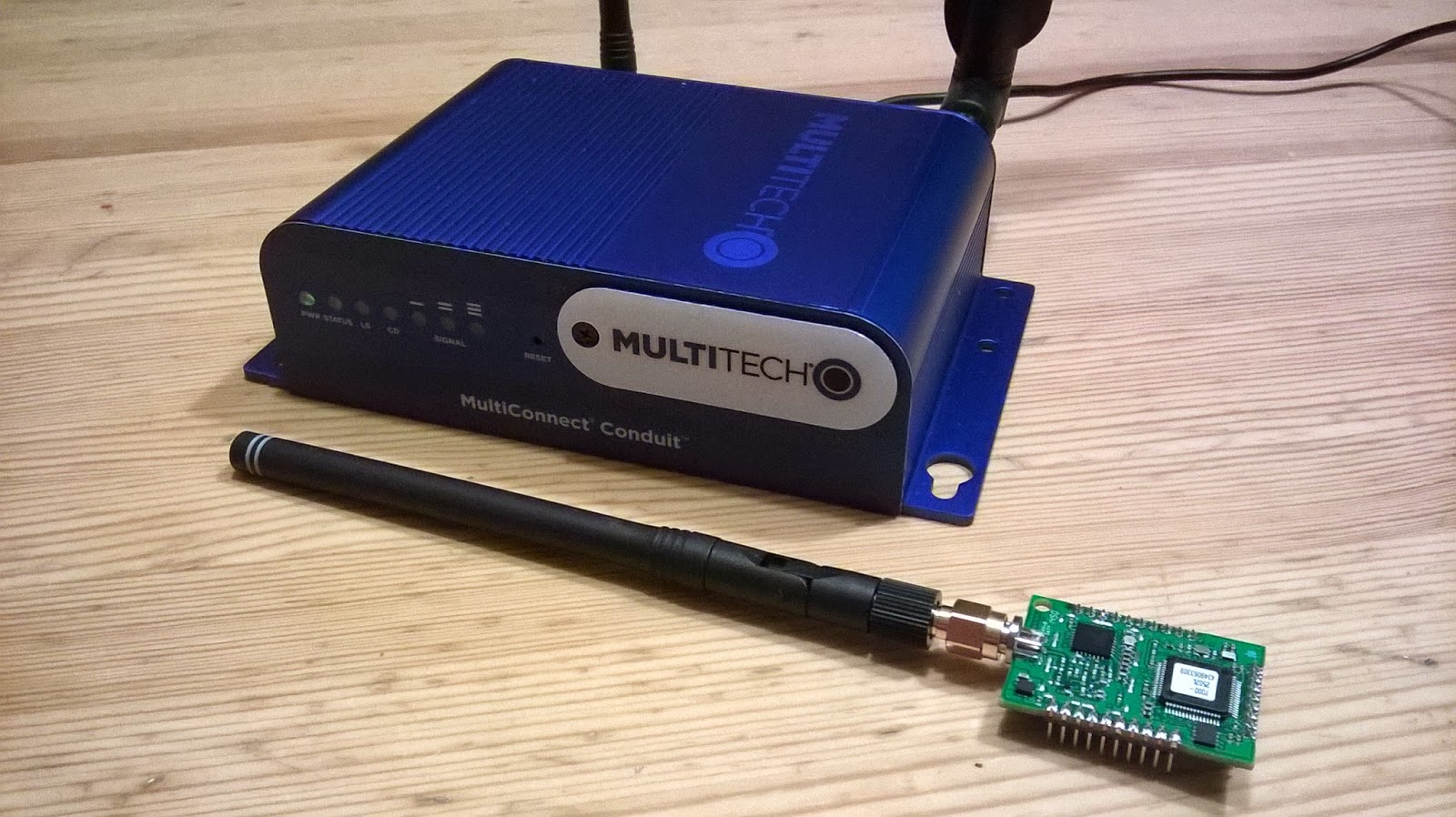 Due to my deep interest to LoRa RF technology, I just got an early engineering sample with 868 MHz LoRa extension module for evaluation use. This is one of the very first Conduit units in Europe. Multitech also provides mDot modules for end device implementation. Espotel already uses LoRa mDots in a customer pilot project. The reason why Espotel has selected Multitech as it's LoRa gateway supplier is that both companies are in close co-operation with ARM and IBM, and members of LoRa Alliance.

Conduit runs developer-friendly Linux operating system with support for many different programming languages, including C/C++, Python, Ruby, Pearl, C#, Java, Node.js and Node-RED. Node-RED is a cool graphical tool to define data paths and integrations. Database, web server and other services on-board makes it possible to implement stand-alone applications without mandatory need for other back-end or cloud at all.

Conduit has compact form factor with dimensions of 13 x 10 x 4,5cm. Two expansion slots together with integrated cellular data modem, GPS, Ethernet, and USB host makes it versatile for many different kind of IOT applications. Initial set of mCard expansion cards include RS-232/485, GPIO and LoRa RF. The USB host port enables use of Wifi, Bluetooth, BLE and other dongles as well as external storage and extended connectivity.

Multitech provides readily available integration with IBM Bluemix via IOT Foundation using MQTT protocol with secure connectivity and safe data storage. Bluemix is handy environment for rapid prototyping and integrations, spanning up to production use as well. Node-RED is one of the programming options in Bluemix as well.

mDot is a new intelligent RF module from Multitech. It is available in two versions; Xbee compatible form factor with pin headers, or surface mount PCB. LoRa variant of mDot contains LoRa RF chip from Semtech and STM32 microcontroller from ST for application software. The controller is freely programmable by user and there is no need for additional MCU. This makes it cost efficient alternative, as a comparison; Microchip's LoRa module has a network controller inside, but requires an external application controller outside, which affects the overall BOM cost structure of a device.

In ARM mbed Ecosystem, Multitech has provided mDot platform support for mbed environment. Free and open source software stack is available via mbed developer site. Free mbed IDE, compiler and repository in cloud makes it easy and straightforward to start development. For more demanding development there is option to deploy the build environment in Eclipse IDE.

With free mDot library and LoRaMAC implementation, plug & play connectivity with Conduit is provided. Multitech provides number of readily available example implementations in mbed team repository which makes it easy to start development. LoRaMAC and mbed can be used with other processors as well, not limited to Multitech modules, like I did with Freescale FRDM-LK25Z board reported in my previous blog posting.

With readily available mbed and Bluemix integration, developer can set up the full chain from device to cloud in matter of hours, not days or weeks or months. This is definitely a significant productivity improvement over the traditional approach.

From now on, I'd feel it silly to start implementing device side code from scratch, manually installing back-end services a top of virtual server, and so on. When teams can focus on what brings the true value to the customer or user, they are able to fail fast - not after months of development - to get immediate feedback whether the idea works or not. As an investor I'd love this approach.

That's the great value prop of the new IOT era - make me able to fail faster than ever before.