Mining in the Automation Age

Australian mining giant Rio Tinto is bringing mining into the automation age. Their Mine of the Future™ program, launched in 2008 and the largest civilian robotics program in the world, has been developed and implemented with the goal of improving mine safety, reducing environmental impact, and cutting costs throughout their operations in Australia’s Pilbara region in Western Australia. The program focuses on four key components: autonomous haulage systems (AHS), AutoHaul®, automated drilling systems (ADS), and the operations center. These initiatives are helping get human workers out of high-risk jobs and dangerous working environments; three years into the program, Rio Tinto saw 70% fewer humans working in danger zones. 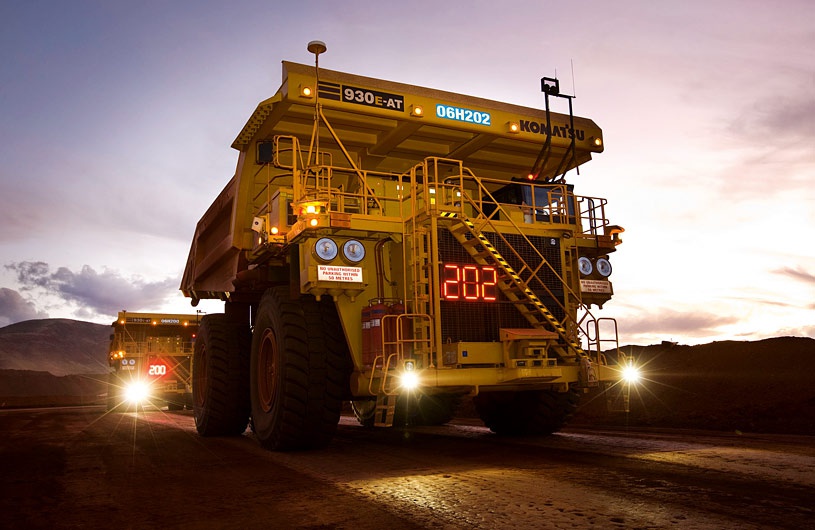 Self-driving trucks are now doing much of the heavy lifting in Pilbara. Rio Tinto recently completed a rollout of 69 driverless trucks, fully automating haulage at two mines and accounting for one fifth of the total Pilbara fleet. Plans are underway for the fleet to grow to 150 autonomous trucks. The massive trucks, which move 20 million tons of iron ore each month, have increased performance by 12% and cut truck operating costs by 13% since the rollout. The trucks are guided by GPS, with remote human operators keeping watch from the Operations Center in Perth in case issues arise.

Rio Tinto has invested US$518 million in autonomous trains for AutoHaul, the roughly 1,000 mile rail network throughout the Pilbara region deployed in the first half of 2015 to connect Rio Tinto’s 15 mines and three port facilities in the state of Western Australia. AutoHaul is the world’s first fully-autonomous heavy haul, long distance railway system, aiming to bring significant safety benefits to Rio Tinto employees and the communities within the Pilbara region. The system is designed to run more than 40 trains comprising a total of 10,000 ore cars fitted with radar, sensory equipment, and mapping technology to recognize when an object is blocking the path and respond to reduce the likelihood of a collision.

Rio Tinto’s automated blast-hole drilling system enables a remote operator using a single console to operate multiple drill rigs, far away from the potentially dangerous blast zone. Coupled with 3D mine visualization software, the ADS can calculate and drill the optimal blast pattern, which is then turned over to robotic explosives trucks programmed to incorporate mapping feedback and set precise blast charges. The ADS is expected to be fully implemented by 2017.

The Wider Implications of Automation

Although certain traditional mining jobs are being lost in the transition to automated mines, new jobs are being created in other areas such as remote operation, maintenance, technology development, and data analysis. In fact, several thousand more jobs are expected to be created as more autonomous mines are designed and built. These new jobs will have the added benefit of being based in a city as opposed to the remote locations in which mines are operated; this will allow more housing options for employees while simultaneously cutting costs for the employer. For other industries considering or implementing automation, the creation of mining industry jobs as a direct result of automation will hopefully alleviate concerns of a rise in unemployment rates.

The design and layout of mines is also undergoing a change due to automation. Automated mines need to account for the size, mobility, and workflow of robotic machines. Systems need to be laid out with non-intersecting pathways akin to a railway network so that vehicles can move freely without the interruption and stoppages common in a road network. These layouts can provide clues as to how other industries can plan their workspaces to embrace and optimize automation.

Automated mines are also providing a proving ground for driverless vehicles. With no human drivers on site, Rio Tinto and other mining companies testing autonomous vehicles do not need to take human unpredictability or error into account. The autonomous fleet can be brought in all at once and skip the transition period in which driverless vehicles coexist with human-operated vehicles. This could be a glimpse of a future system in which all cars are autonomous and networked, and if successful, could go a long way in improving visibility and public opinion regarding driverless cars.

The Technology behind Automation

Automation and robotics require complex underlying systems in order to function efficiently and accurately. They need careful material selection and countless hours of programming. That only accounts for part of the process, though. After they are built, the machines need to get to work. With the growth of M2M networks and capabilities, machines are able to communicate and synchronize more easily than ever before to get the job done.

In order to control and track a fleet of automated trucks, trains, and drilling rigs, especially across a vast region like Pilbara, the fleet must gather accurate GPS data to send back to the Operations Center. This data needs to be transmitted over a long distance, requiring cellular connectivity. The machines also need to be able to communicate with each other or with on-site maintenance staff, potentially using Bluetooth, Wi-Fi, or RFID connectivity. Sensors need to be incorporated to track environmental conditions like temperature and moisture, calculate cargo weight and capacity, and detect objects blocking a machine’s path. All of this data needs to be stored so it can be accessed and analyzed, calling for storage solutions to hold the data and graphics processors to drive visualization and analytics displays.

To get your automation design started and implemented, call Symmetry at (310) 536-6190 or contact us online.