From Digi: "Building the Amazon Bridge: A Review of AWS Re:Invent 2018 #reInvent"

AWS re:Invent once again wows with services that help IoT developers cross the chasm from edge device to cloud success 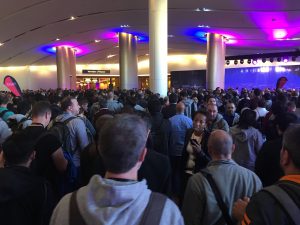 I spent the week at AWS re-Invent 2018 with the tens of thousands other IoT pilgrims.  Once again Amazon wowed attendees with a raft of new services and announcements for both enterprise AWS services and AWS IoT. This was my second consecutive AWS re-Invent so I felt a little more comfortable with the crowds and was a little more efficient in my navigation of the breakouts, keynotes, demos, and array of networking events.

My perception of the crowd this year was a little different.  Last year I felt most were just there to drink at the well of AWS and the Internet of Things.  Most questions were somewhat academic or just inquisitive.

This year I felt everyone was moving and presenting with more purpose. Questions in sessions were more about deployment than development – “I have a fleet that I monitor and am wondering how AWS IoT Events will help me flag dropouts faster.”

I have three quick take-aways from this year’s conference.

Scale in the IoT is not limited to new, consumer offerings and this year AWS IoT put it front and center.

The time for exploration of the IoT is over. AWS re:Invent 2018 demonstrated that both the technology stack and the customers are moving into deployment.