From Nordic: Field-testing how distance affects the behavior of LTE-M and NB-IoT

This blog post complements the video with the same title, see this.

There are many sources of information on the web trying to characterize the new low power cellular technologies LTE-M (Cat-M1) and NB-IoT (Cat-NB1). Unfortunately, many of the characterizations list ideal numbers, which probably isn't too applicable to your real-world product. To obtain more valuable characterizations we went out in the Norwegian wilderness to field-test how distance/signal quality affects the behavior of LTE-M and NB-IoT.

New to LTE terminology? Check out the bottom of the page.

There are a couple of relevant differences between LTE-M and NB-IoT that are worth mentioning before continuing. Firstly, the on-air bandwidth is different. LTE-M has 1.4 MHz, while NB-IoT has 200 kHz. The bigger bandwidth of LTE-M results in higher throughput, while the smaller bandwidth of NB-IoT should result in better signal quality and range. Secondly, the modulation is different. LTE-M uses QPSK or 16QAM in both UL and DL depending on signal quality, while NB-IoT uses BPSK or QPSK in UL, depending on signal quality, and only QPSK in DL. Each symbol in these modulations represents different number of bits. More bits per symbol means higher bitrate/throughput and higher energy efficiency.

Some elaboration on the parameters we sampled:

We used a standard nRF9160 DK to perform the test, with a SIM card from the Norwegian mobile operator Telenor. Test location was Valdresflya in Norway, a flat mountain plateau. There is a mountain peak there, called Bitihorn (1607 MASL), with an eNB on the top. There are no other eNBs close by, so we didn't need to worry about our UE (nRF9160 DK) connecting to other unwanted eNBs. From the base of the mountain there is a relatively straight road leading away. We tested with LTE-M first. 3 kilometers away from eNB, we sampled the four parameters. Then we moved one more kilometer away, and sampled again. We repeated this until we lost the connection. Then we did the same for NB-IoT.

We expected to get better numbers for output power and RSRP on NB-IoT, mainly because of the smaller bandwidth it has compared to LTE-M. For LTE-M modulation we expected to see 16QAM being used closer to the eNB, and QPSK further away. Similarly for QPSK and BPSK for NB-IoT in uplink. 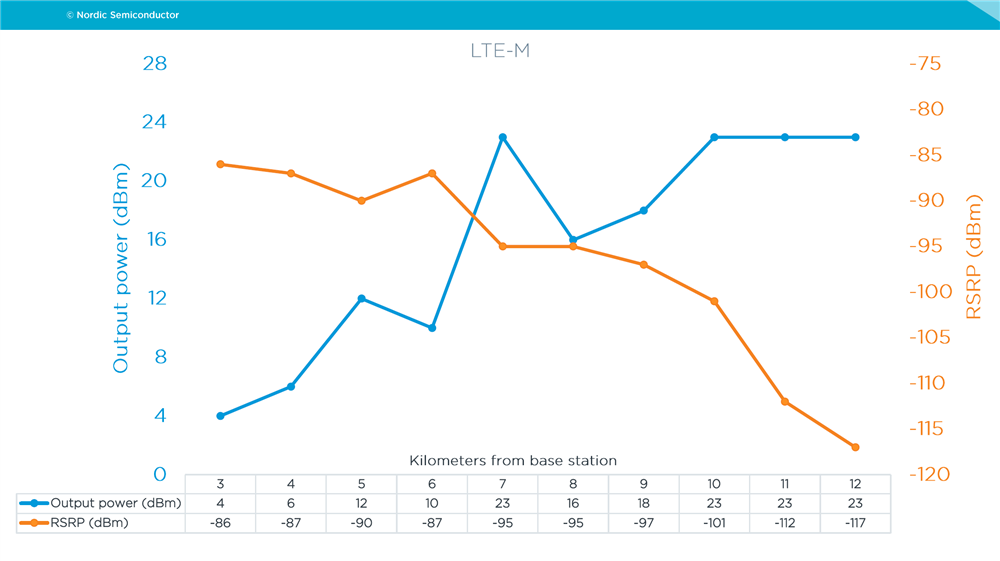 The above graph shows the measured output power and RSRP for LTE-M. Output power is on the left axis, while RSRP is on the right. The bottom shows kilometers from the eNB/base station, with the actual measurements. Close to the eNB the output power is low, only 4 dBm, meaning the UE is very energy effective when sending its data. Further away it increases, becoming less and less energy effective, until it ends up at 23 dBm, which is the maximum. The RSRP is opposite, being -86 dBm at 3 km, and decreasing down to -117 dBm at 12 km.

The above table show all results related to LTE-M, including modulation and repetitions. From 3 km to 9-10 km 16QAM modulation was mostly used in UL, before QPSK gradually becomes dominant. For DL only QPSK modulation was used. This was a bit unexpected, but after some investigation we found out that this can happen, and it is normal. More and more repetitions of 8 were observed in DL after 10 km. For DL, repetitions was observed more and more after 11 km.

In a more ideal test location we suspect that the connection could have been kept even longer, especially with NB-IoT. By studying the elevation profile it easy to see that we get disconnected approximately in the area where we lose line of sight with the eNB. It is also important to note that we did this field test back in December 2018, significant improvements and optimizations have been implemented on the hardware and software on both the nRF9160 DK and on the network side since then, increasing performance and maturity.

We are excited about the results. It is remarkable to see how the parameters adapt to never use more energy than necessary. It is impressive to see the range that can be achieved with these technologies. More than 14 kilometers is excellent, especially when keeping in mind that these are low power technologies. It is also important to be aware that in most cases there would be a closer eNB to reselect/handover before reaching this distance, meaning that you would typically use low output power, the best modulations and no repetitions.

For more information about our low power cellular IoT solutions, please see this.