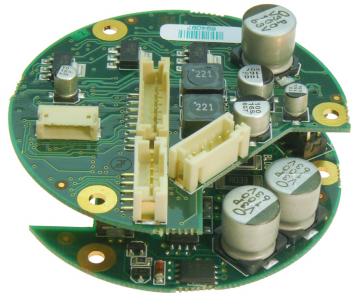 Brushless Direct Current (BLDC) motors are one of the motor types rapidly gaining popularity. These cost effective modules take away the complexity and difficulty of motor control and design through specialty software and proven hardware. BLDC motors are used in industries such as appliances, automotive, aerospace, consumer, medical, and industrial automation equipment and instrumentation.

As the name implies, BLDC motors do not use brushes for commutation; instead, they are electronically commutated. BLDC motors have many advantages over brushed DC motors and induction motors, including:

In addition, the ratio of torque delivered to the size of the motor is higher, making it useful in applications where space and weight are critical factors.

The rotor is made of permanent magnets and can vary from two to eight pole pairs with alternate North (N) and South (S) poles. Ferrite magnets are traditionally used to make permanent magnets. As the technology advances, rare earth alloy magnets are gaining popularity. Ferrite magnets are less expensive but they have the disadvantage of low flux density for a given volume. In contrast, the alloy material has high magnetic density per volume and enables the rotor to compress further for the same torque. Also, these alloy magnets improve the size-to-weight ratio and give higher torque for the same size motor using ferrite magnets.

The stator of a BLDC motor consists of stacked steel laminations with windings placed in the slots that are axially cut along the inner periphery. Traditionally, the stator resembles that of an induction motor; however, the windings are distributed in a different manner. Most BLDC motors have three stator windings connected in star fashion. Each of these windings is constructed with numerous interconnected coils, and distributed over the stator periphery to form an even numbers of poles. As the rotor aligns with one of the stator poles, the second phase is energized. The two phases alternate on and off, and also reverse polarity.

Unlike a brushed DC motor, the commutation of a BLDC motor is controlled electronically. To rotate the BLDC motor, the stator windings should be energized in a sequence. It is important to know the rotor position in order to understand which winding will be energized following the energizing sequence. Rotor position is sensed using Hall effect sensors embedded into the stator. Most BLDC motors have three Hall sensors embedded into the stator on the non-driving end of the motor.

Whenever the rotor’s magnetic poles pass near the Hall sensors, they give a high or low signal, indicating the N or S pole is passing near the sensors. Based on the combination of these three Hall sensor signals, the exact sequence of commutation can be determined.

Each commutation sequence has one of the windings energized to positive power (current enters into the winding), the second winding is negative (current exits the winding) and the third is in a non-energized condition.

Torque is produced because of the interaction between the magnetic field generated by the stator coils and the permanent magnets. Ideally, the peak torque occurs when these two fields are at 90° to each other and falls off as the fields move together. In order to keep the motor running, the magnetic field produced by the windings should shift position, as the rotor moves to catch up with the stator field. What is known as a 6-Step commutation defines the sequence of energizing the windings.

The Trinamic TMCM-170 is a controller / driver module for high performance servo drives based on brushless DC motors. It gives a high resolution like a stepper motor coupled with the high dynamic, high velocity and high reliability of a BLDC drive. A built-in ramp generator allows parameterized smooth positioning, with an external switch in order to provide for an absolute position reference. Its small form factor allows direct mounting on or into a motor-encoder assembly. The TMCM-170 integrates a position regulator and a ramp generator, to allow for velocity modes. The module can be remote controlled via an RS232, an RS485, or a CAN interface option.

Getting Started with the Trinamic TMCM-170

A demonstration application for the TMCM-170 module gives a simple way to set the module into operation. The Trinamic TMCL IDE allows to update the modules firmware and to test / set all of the modules’ parameters via all supported bus systems.

The motion control commands (TMCL_ROL, TMCM_ROR, TMCL_MVP) use a PID (proportional integral derivative controller), the heart of motor control applications. Designed for position and velocity control, the PID regulator has to be parameterized with respect to a given motor in a given application. The default parameter set of the PID regulator covers a range of motors suitable for the TMCM-170 module, and typically works stably up to 8000 rpm maximum motor velocity (related to an 8 pole motor) with an encoder resolution of up to 4096. However, for slower motors or lower encoder resolutions, the response time with this parameter set may become quite slow. The PID regulator uses four basic parameters: the P, I, and D values, as well as a timing control value. The timing control value (PID regulation loop delay) determines how often the PID regulator is evoked.

Trinamic software tools allow for easy insertion of commands and PID values to be inserted. To parameterize the PID regulator for a given motor, first modify the P parameter with all other parameters set to 0, starting from a low value and going to a higher value, until the fastest response with minimum oscillation around the target position is given (touch the motor / watch the actual position and motor current). Try with low velocities and stand still if you want to tune positioning response. To modify parameters, always use double or half of the previous value, in order to really see how the parameter influences behavior.