Augustine Nguyen is an Applications Engineer at Symmetry Electronics. He has his Bachelor’s in Electrical Engineering from University of California, Irvine, and five years of hands-on experience in application development and systems testing for Bluetooth and Wi-Fi. In his current role, Augustine works as a technical advisor to assist engineers in designing, developing, and implementing IoT and embedded system products. Augustine is customer service oriented and works diligently to meet customer objectives while providing innovative solutions to common problems. He has extensive knowledge of the latest products and technologies and active relationships with the world’s leading electronic component manufacturers. 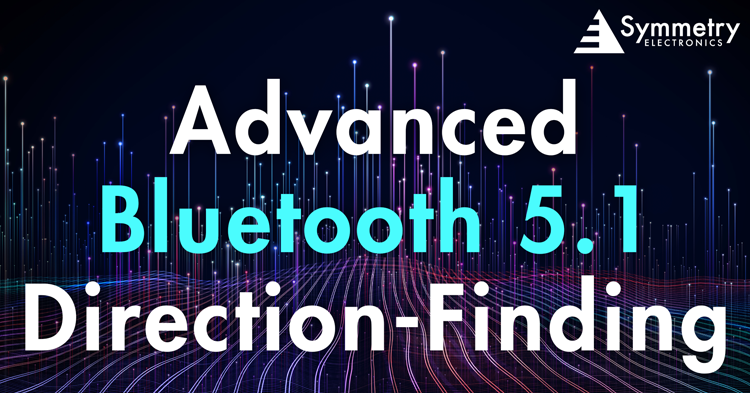 The introduction of GPS and other location services has changed the way our world tracks important assets like cars, cargo and people. Although extremely useful and powerful, GPS lacks the ability to track indoors due to its high frequency satellite signals and the inability to penetrate physical structures. This has caused people to seek an alternative solution for indoor location tracking. In 2019, Bluetooth 5.1 (BT5.1) was released–causing a breakthrough in direction-finding technology, and the ability to support Real-Time Location Systems (RTLS) for more complex and advanced indoor applications. Today, we have Bluetooth 5.2, which offers the same features as Bluetooth 5.1, along with backwards compatibility. In this article, we will cover the features and benefits of Bluetooth 5.1 as it represents a turning point in RTLS and is the foundation of the most current wireless protocol.

Real-Time Location Systems serve as a wireless ecosystem for locator and tag devices to constantly communicate accurate location tracking data amongst one another. Although similar to GPS, Real-Time Location Systems differ in their ability to deliver precise location tracking data indoors. Bluetooth 5.1 supports RTLS by utilizing multiple antennas at either the transmitter or receiver while leveraging the low power consumption of Bluetooth Low Energy (BLE). This approach is instrumental for advanced IoT applications in the shipping and manufacturing industries that require accurate asset tracking and monitoring in places like warehouses. Simple low-power tags powered by coin cell batteries can now be easily mounted to equipment, assets, and even people to be tracked using various routers spread out across a warehouse that serve as locators.

Prior to Bluetooth 5.0, Bluetooth had only been capable of tracking location via the beaconing method, which is based on Received Signal Strength Indication (RSSI). RSSI is a simple method that involves monitoring the strength of the transmitted signal from a source to determine the distance between two devices. While useful, the RSSI approach does not provide the precision that RTLS is capable of, as it only offers a wide estimation of a beacon’s location. Bluetooth 5.1 utilizes Angle-of-Arrival (AoA) and Angle-of-Departure (AoD) techniques to measure a signal’s phase and amplitude which delivers a more precise location in addition to the distance-only information that RSSI offers.

AoA works by transmitting a specific direction-finding packet via a beacon or tag that is received by a device or locator containing an array of multiple antennas. The locator node utilizes an embedded location engine that is required to calculate the signal’s angle of arrival. The signal received by each of the antennas arrive at different times relative to one another. These shifts in signal phase are then sampled and calculated to determine the relative angle that produces the coordinate information of the source. Asset tracking or any form of Point-of-Interest (PoI) applications are most suited for this method–where many low-powered tags can simply broadcast their location to an AoA locator, such as a wireless access point or router that tend to support multiple antennas. 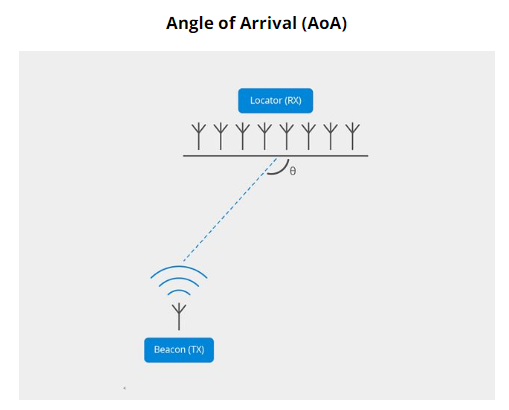 The AoD method is essentially the opposite of AoA, as the transmitting device contains an array of antennas, while the receiving device contains a single-antenna receiver. The receiving device samples the signal as IQ components and performs the coordinate calculation. This scenario is optimal for devices like mobile phones that typically contain only one antenna for Bluetooth. Mobile phones are capable of utilizing Bluetooth 5.1 location tracking without the need for added hardware, as long as they contain the software necessary to support the location engine. 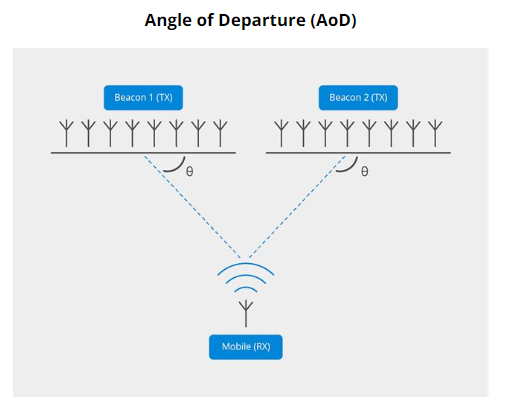 The hardware requirements for Bluetooth direction-finding differs depending on the node device. The simple tags needed for AoA or AoD only require a single antenna, which is similar to that of traditional Bluetooth devices. However, designs for locators that rely on a multiple antenna array become much more complex. At the locator hub, an antenna array is multiplexed to the Bluetooth SoC through an external RF switch that essentially switches between the antennas to collect IQ samples from each element. Multiple antennas are implemented in this fashion, as manufacturing Bluetooth SoCs with multiple antennas ports or pins would prove to be extremely expensive. The antenna array requires 360-degree coverage to ensure reception to omnidirectional signals, or 180 degrees for wall-mounted units. In addition to these hardware requirements, Bluetooth 5.1 devices require software enhancements to support the location engine needed to transmit specific direction-finding packets and to carry out the angle calculations on the receiver side. 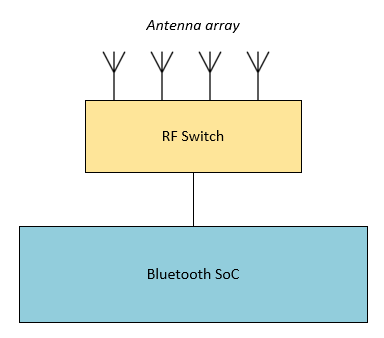 Bluetooth 5.1 brought about many benefits for Real-Time Location Systems in addressing complex IoT applications. With the previous versions of Bluetooth being some of the most prevalent wireless technologies existing today, Bluetooth 5.1 and now, Bluetooth 5.2,  make it easier for product developers to create Real-Time Location Systems that are more stable and accurate, while easier to integrate with a variety of devices. From tracking the mobile devices of customers at the mall to the many tagged sensors mounted to containers and boxes in warehouses, assets can now be easily monitored to provide more in-depth data to network administrators. To address this exciting new demand for Bluetooth Direction-Finding, Symmetry Electronics serves as a distributor for a variety of manufacturers that produce RF modules, System on Chip (SoCs), and fully integrated devices like routers that can support this innovative technology.

Augustine Nguyen is an Applications Engineer at Symmetry Electronics. He has his Bachelor’s in Electrical Engineering from University of California, Irvine, and five years of hands-on experience in application development and systems testing for Bluetooth and Wi-Fi. In his current role, Augustine works as a technical advisor to assist engineers in designing, developing, and implementing IoT and embedded system products. Augustine is customer service oriented and works diligently to meet customer objectives while providing innovative solutions to common problems. He has extensive knowledge of the latest products and technologies and active relationships with the world’s leading electronic component manufacturers.