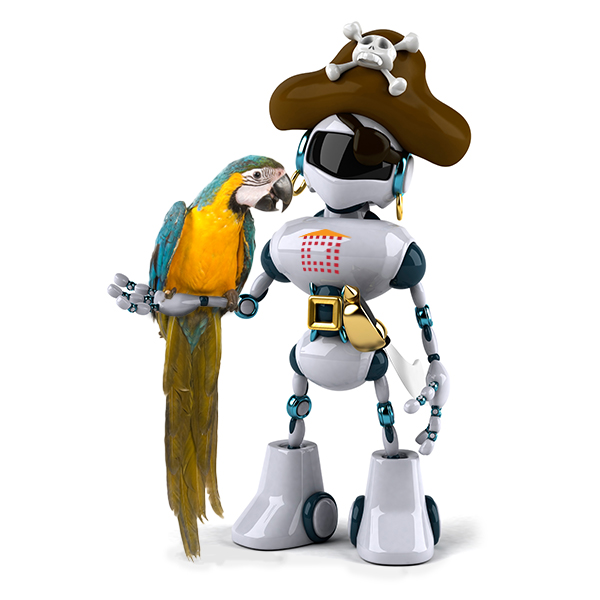 Ahoy, matey! In honor of this year’s International Talk Like a Pirate Day, we’re taking a look at some of our favorite pirate-themed projects featuring the ARRR-duino!

What is a pirate without a ship? More importantly, what is a pirate with a high-tech autonomous nautical drone for a ship? We’re not sure, but we’d like to find out. Last year, an unmanned drone called Scout broke the record for the longest distance traveled by an autonomous transatlantic water craft. The solar powered drone is controlled by two Arduino Mega microcontrollers that handle navigation, sensors, and communication.

Have your own ideas swimming in your head? SemiconductorStore.com has everything you need to get started on your own adventure, including Arduino, Iridium transceiver antennas, and GPS networking products.

No good pirate ship is complete without a defense system! A Qualcomm Battle of the Schools competition team representing Virginia Tech University created a pneumatic cannon powered by Arduino and controlled via Android app that uses Bluetooth technology to signal the cannon to fire. This gives the cannon a 30-foot line-of-sight range from which to be fired.

If you’re looking for something a little gentler, Arduino-controlled motion activated water cannons are fun too! Use it to soak shipmates or enemy pirates (or to water your garden).

Ready to pull the trigger on your own project? Find the Arduino UNO and everything you’ll need for Bluetooth and cellular networking at SemiconductorStore.com.

Inclement weather can throw even the best pirate’s plans off-course. The Arduino DUE can be used to create a weather station that measures environmental temperature, relative humidity, and atmospheric pressure.

Take the world by storm with your design! Visit SemiconductorStore.com for all your weather station needs, including the Arduino DUE, sensors, and LCDs.

Buried treasure is always hard to find, even with a map. It’s even harder to find when it’s buried underwater. Enter the OpenROV (Remotely Operated Vehicle), an open source and crowdsourced underwater robot controlled by an Arduino microcontroller that’s making underwater exploration accessible to the general public. The OpenROV sends visuals from underwater to a computer on the surface via live video, and can be controlled and navigated through the same computer.

Looking to strike gold? You can buy an OpenROV kit, or you can build your own version using Arduino, USB HD webcams, and LEDs, all available from SemiconductorStore.com.

Fight off the mutiny with Arduino, RF transmitters, and motion sensors, available at SemiconductorStore.com.

Do you have other great pirate-themed Arduino projects in mind? Share the bounty and have your parrot squawk them at us! Call Symmetry at (310) 536-6190, or contact us online. Fair winds to ye!